The German car maker and owner of the Mini brand may need to rename its new e-advertising campaign called MINI GENIUS because it is too similar to Apple’s trademarks.
The Mini brand of cars first rolled out in 1959 by the British Motor Company. The cars are known for their small, economic layout  and very distinct look. The Mini brand is now owned by BMW and the brand has seen a big resurgence in the cost and environmentally conscious modern times. 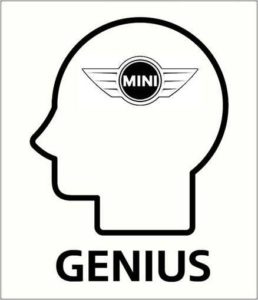 In March 2015, BMW filed two trademark registration applications. One for the word mark, MINI GENIUS; the other for the logo that can be scene on the right. The marks were filed in a class covering computer application software for mobile phones for viewing images and videos about automobiles. In other words, some kind of phone app that lets users watch video commercials for Minis. This is an intent to use mark and therefore it is not yet being used in commerce by BMW, yet.
On June 30, 2015, the MINI GENIUS work mark was published for opinion (the logo has not yet been published for opinion) and Apple sought and has been granted an extension of time to oppose the registration of the mark. This is the usual first step in opposing a mark as it allows the parties more time to contemplate their positions and even try to negotiate some type of settlement. Apple uses two trademarks that are similar in name and classes to the proposed mark. Apple puts out its line of iPad Mini’s and owns a registered trademark for the IPAD MINI term. Apple also uses the GENIUS mark in association with its stores and services such as the registered GENIUS BAR trademark.
As the proposed MINI GENIUS mark is in a class, applications for phones, that overlaps into Apple’s classes for the goods and services, you can see why Apple may argue that the proposed mark is confusingly similar to their MINI and GENIUS marks. Apple’s formal opposition to the mark is not due until October 28, 2015 providing the two big companies a good time frame to reach some accord on the proposed mark.