Apple wants to take a bite out of a new Disney trademark. Apple, Inc. looks ready to oppose Disney’s attempt to register a trademark for a logo featuring an apple with a bite taken out of it in association with its new movie, Descendants. 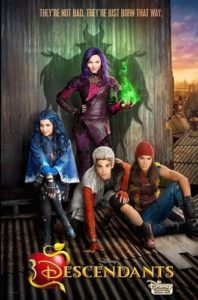 On July 31st, the Disney Channel will premiere the original movie, Descendants, which tells the story of the teenage lives of the children of some of Disney’s greatest villain characters as they attend prep school with the kids of Disney’s heroes. Some of the descendants include the sons of Belle and Beast, Aladdin and Jasmine, and Cinderella and Prince Charming as they face off against the children of Jafar (played by someone named Booboo Stewart) and Cruella Da Vil. Seems Disney teenage characters are a running theme here; yesterday, we told you about Disney’s attempt to fight the trademark registration of teen versions of similar characters for toys.
In association with the movie, Disney has filed trademark applications for the Descendants logo, as seen in the poster, and solely for the apple contained in the logo. In November, Disney filed trademark registrations for the thorny vine apple as seen below in several classes of goods that cover merchandise including jewelry, headphones and the ever popular, pagers. (I am very sure that the teenage “descendants” have no clue what a pager even is.)
Yesterday, Apple, Inc. filed its request for an extension of time to oppose Disney’s apple; this is the usual first step to oppose registration of a mark and gives the parties additional time to either work out a settlement or gear up the opposition. So when looking at the two trademarks below, would you confuse Disney’s apple with Apple’s iconic logo? If you saw Disney’s apple on a pager, would you think that product originated with or was endorsed by Apple? These are the key questions that the Trademark Office must answer if a formal opposition is filed. Apple’s opposition to the mark, if any, must be filed by August 1st.