Dick Cook have his goose cooked? A new motion picture production company created by the former head of Disney had its trademark opposed by DC Comics claiming it has priority over the “DC” mark. 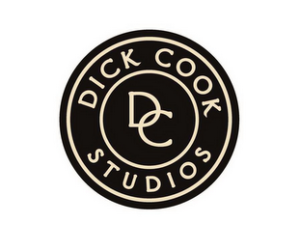 Richard W. “Dick” Cook is a film entertainment executive that was the Chairman of the Walt Disney Studios from 2002 to 2009. After reportedly being asked to step down, Cook has served on the Board of Directors of Legendary Pictures since 2011. Cook also started his own business and at the end of March, Dick Cooks Studios (“DCS”), a Burbank-based production and distribution company, landed $500 million in film financing. Also announced was the company’s first film which will be Ranger’s Apprentice with a screenplay from Paul Haggis (Million Dollar Baby and Crash). The movie is set to begin production in the fall.
In November 2014, DCS filed trademark registration applications for the logo to the new company in five different classes of goods to cover his movie production services and an array of products ranging from footwear to envelopes. This week, DC Comics filed its opposition to the registration of the logo. Specifically, DC Comics cites its two logos, as seen above, that should block registration of the DCS mark and claims ownership rights in the “DC” initials. DC Comics claims the logo is identical and/or similar to DCS mark in sight, sound and commercial impression. While there are many companies using “DC,” there is one major comic book company and movie studio using the mark and that is DC Comics.

The question that must be answered by the Trademark Office: is the DCS mark confusingly similar to the DC logos? Meaning would consumers, if they saw the DCS logo appear before the beginning of a movie, think that the movie is affiliated with DC Comics. Its a tough call and I could see the argument going both ways; if you just look at the middle of the logo, the “DC” part could lead to confusion but the rest of the logo makes it clear that it is not related to DC Comics. The sides will fight it out before the Trademark Trial and Appeal Board unless a compromise can be reached. “Rich Cook Studios” doesn’t sound bad either, just saying.