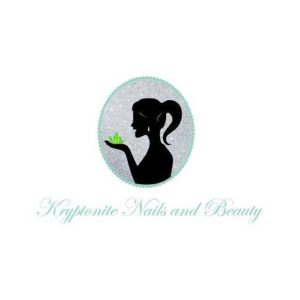 Does Superman have to trim his nails with his heat vision? DC Comics has opposed the trademark registration for KRYPTONITE NAILS AND BEAUTY for a traveling manicurist. Wonder Woman is not pleased.

Kryptonite Nails and Beauty LLC is owned by Cheron Durley-Williams who is a traveling manicurist that will come and make your nails look pretty…but with a $20 deposit required at booking. It is pretty clear from looking at the company’s trademark to the right that is it pretty familiar with DC Comics and Superman’s tie to kryptonite. Cheron put in this trademark application by herself and why people should really use lawyers cause DC Comics opposes every mark that contains KRYPTONITE.

In Greek, krypton roughly translates as “the hidden one” and is a chemical element with symbol Kr and atomic number 36. It is a colorless, odorless, and tasteless noble gas that is found in trace amounts in the atmosphere. Enough science for today. While Superman was first introduced in 1938, it wasn’t until 1943 that the KRYPTON and KYPTONITE trademarks started being used with the Man of Steel. Kryptonite is a fictional material used to weaken Superman’s powers. Over the years, DC Comics has used many variations of the mark including KRYPTO THE SUPERDOG. The mark has become almost as famous as Superman and DC Comics owns several register trademarks for the KRYPTON marks.

In a similar trademark opposition that I have seen several times before, DC Comics argues that due to its extensive use of the KRYPTONITE mark that people would associate the manicurist with DC Comics. Basically, DC Comics claims that if you called Kryptonite Nails and Beauty to come and make your nails a nice shade of green you would think it was in some way licensed by or affiliated with DC Comics, when it is not.

I do not have high hopes for this mark getting registered. Also, Kryptonite Nails and Beauty LLC has to be careful to avoid a trademark infringement lawsuit since it is using the KRYPTONITE mark in commerce. Lex Luther hopefully will pay for the legal defense.