If only Disney could have waited one more day to file this trademark opposition….but it was a Saturday. On the eve of 4/20, Disney has opposed a marijuana extract’s company’s blatant attempt to register its VADER EXTRACTS trademark that it has openly affiliated with Disney’s Darth Vader character. 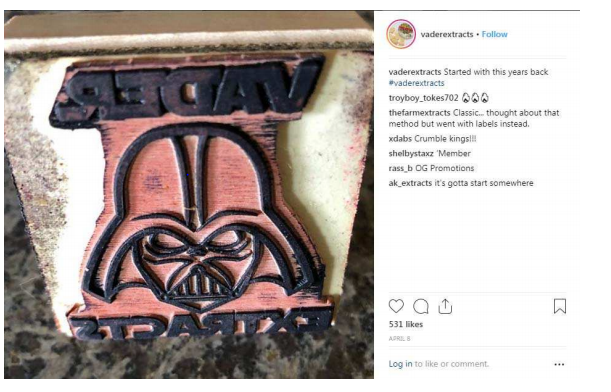 Vader Extracts is a California-based extraction company that specializes in a variety of marijuana products including concentrated oils that are extracted from cannabis plants,. They even took home first place for best booth at the 2014 Bay Area Medical Cannabis Cup. The company openly associates itself with the Star Wars character of Darth Vader through its social media as can be seen to the right. The company uses not only the VADER trademark but the appearance of our Lord Vader to promote its products. While Star Wars sells, not a good idea to use it to sell your products without permission.

In May 2018, Vader Extracts through its attorney, Melissa K. Dagodag (man that name is so close to Dagobah) filed a trademark registration application to register the VADER EXTRACTS mark on clothing products. I have no clue why anyone thought this was a good idea. Not only does the mark have to chance of succeeding but it put the company square in the firing line to get sued for trademark infringement. Disney argues that the mark is confusingly similar to its VADER registered trademark and that it should not be granted a trademark registration. Unlike Vader, Disney will be successful in crushing this trademark rebellion.