Ever wonder what princesses looked like during their awkward teen years?? After Disney lost a trademark battle over ZOMBIE CINDERELLA, the same toy company is fighting again with Disney over several trademarks for teen versions of characters made famous by Disney including Teen Tinkerbell. 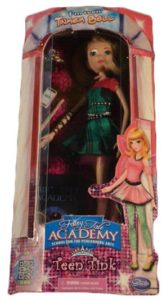 United Trademark Holdings, Inc. (“UTH”) is a distributor of toys that come close to imitating Disney’s characters but not close enough to equal trouble…so far. The company produces dolls of its own version of not quite “Cars”, not quite “Frozen” and a zombie line of princesses. Back in October, Disney lost an attempt to prevent UTH’s registration of the ZOMBIE CINDERELLA mark. You can read more about that case here. Many of the Disney princesses and characters, while we immediately associate them with Disney, are based off of fairy tales that are in the public domain. While Disney cannot exclude others from telling their own tales of these characters, it does own several trademarks for the character names.

In February, fresh off of its trademark victory over Disney, UTH filed trademarks for a new line of dolls, teen versions of many characters made famous by Disney. UTH filed trademark registrations for TEEN PETER PAN, TEEN SLEEPING BEAUTY, TEEN TINKER BELL, TEEN SNOW WHITE, TEEN CINDERELLA and TEEN PINOCCHIO. Its clear UTH knows what it is doing by using these characters made famous by Disney but again these are all characters in the public domain and can be exploited by anyone.

Last week, Disney formally filed it opposition to TEEN TINKER BELL, the time to oppose the other marks is not yet due. Disney has been using the TINKERBELL mark since 1953 when the animated Peter Pan movie was released and has been using the mark on a whole lot of different products and on television shows since. Disney owns several registered marks associated with the fairy including TINKERBELL AND TINK.  The parties are already in a dispute over the TEEN TINK mark that can be seen in use on the image above. Disney argues that the TEEN TINKER BELL mark is confusingly similar to Disney’s trademark. In essence, Disney argues that if you purchased a doll bearing the TEEN TINKER BELL mark you would automatically be confused and think that the doll came from or was endorsed by Disney. The Trademark Office held in the ZOMBIE CINDERELLA case that while the dominant part of the mark, the term CINDERELLA was similar to Disney’s trademark, the preceding language, “Walt Disney” was very different from “Zombie”. Disney will face a very similar argument and battle in this case.
Disney hopes that Teen Tinkerbell will be a lot easier to dispose of than Zombie Cinderella.