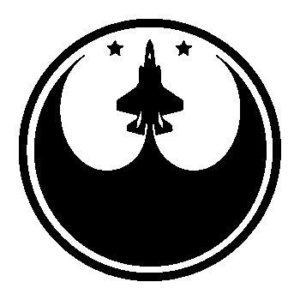 I’m sure everything I do in life is actually influenced by the Star Wars movies but when it inspires your business name and logo, you have a Starkiller base-sized problems. Lucasfilm has requested an extension of time to oppose the attempt to register the trademark of the logo for an app creator whose company’s name and logo appear to be heavily influenced by Star Wars.

Red Squadron LLC is a company based out of Woodstock, Georgia. I couldn’t find much about the company from doing some Google stalking but they appear to be in the business of creating apps for mobile devices. The name of the company should give you a hint as to the problems to come. Of course, Red Squadron was a squadron of X-wing starfighters that served as part of the Rebel Alliance’s starfighter corps during the Galactic Civil War. The squadron participated in campaigns such as the Battle of Yavin (A New Hope) and the Battle of Endor (Return of the Jedi). The most memorable scene invoking the group was in A New Hope when Red 5, Luke Skywalker, lead the group in the campaign to blow up the Death Star.

Red Squadron LLC was not done paying homage to Star Wars with its company name but filed an intent to use trademark application for its logo in a class that covers “computer software development in the field of mobile applications”. Since this is an intent to use mark, the app featuring the logo is not yet being distributed. In August 2015, Red Squadron filed for the registration of the mark and last week Lucasfilm (owned by Disney) requested and was granted an extension of time to oppose the mark. This is the usual first step in the trademark process and allows Lucasfilm extra time to draft its opposition, work out a deal with Red Squadron LLC or even decide not to oppose the mark.

The test for the registration is whether the new trademark is confusingly similar to an in use mark. Its not hard to see that the logo was heavily influenced by the rebel insignia which can be seen above. Taken from afar, the marks almost look identical. Lucasfilm has used the mark on a ton of different merchandise, the movies and the mark is quite famous. I can’t imagine that Red Squadron is going to fight for this mark and take on Disney. The Red Squadron mark is bound to meet the same ugly fate as Porkins. The company is now on Lucas’ radar and they also might have something to say about the name of the company as well. The Trademark Wars will continue…