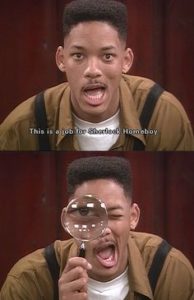 This is “The Case of the Curious Trademark and Contemptible Registration.” The estate of Sir Author Conan Doyle, the creator of Sherlock Holmes, has opposed Universal’s attempt to register the SHERLOCK HOMEBOY trademark and claims Universal committed fraud on the Trademark Office in the process.
Beginning in the 1880’s, Sir Arthur Conan Doyle authored and published four novels and 56 short stories about the exploits of detective Sherlock Holmes and his trusted sidekick, Dr. John H. Watson. Most of the stories are now in the public domain and this is why there are so many Sherlock related television shows and movies….cause it is free to exploit. The Doyle Estate unsuccessfully tried to claim that some of the stories were not in the public domain in a dispute that went all the way up to the Supreme Court and you can read about that here. While the stories are in the public domain, the SHERLOCK HOLMES trademark is still owned, and enforced by, the Conan Doyle Estate Ltd. Recently, the Estate fought over the registration of the Sherlock Gnomes trademark.
This is an intent to use trademark registration so Universal’s use of the mark remains shrouded in mystery. The “Sherlock Homeboy” term has been used by many different people and companies but has its origin in a television show reference. Way back in 1990, NBC premiered a sitcom about a kid from Philadelphia being sent to California to live with his rich family in a show called, *The Fresh Prince of Bel-Air. *The show starred an up-and-coming rapper named Will Smith and the show lasted for six seasons. During an episode, Will eavesdrops on a conversation between his cousin Hillary and her friend and overhears that Hillary has dropped out of college but hasn’t told her parents. Will pulls out a magnifying glass and says: “This is a job for Sherlock Homeboy.” (Picture for your reference.) Sherlock Homeboy was later used in a series of YouTube videos about an inner city detective, again as a band name, and even on the kid’s television show, Yo Gabba Gabba. So it seems the name caught on.
Back in 2006, Universal tried to register the trademark for the SHERLOCK HOMEBOY term and it was initially approved by the Trademark Office without an opposition from the Doyle Estate but Universal never submitted proof that the mark was actually in use, so the attempted registration was abandoned. In April 2015, Universal once again filed registrations to use the mark on a series of goods covering television programs and a whole bunch of merchandise like t-shirts.
The Doyle Estate filed an an opposition to the mark claiming that the SHERLOCK HOLMES trademark is distinctive and famous and widely recognized as a designation source of the Estate’s goods and services. The Estate claims that Universal’s use of the mark will “tarnish and degrade the positive associations and prestigious connotations” of the Estate’s marks. (Could have been written by Doyle himself.) The Estate claims that if used on goods people are likely to be confused to believe that SHERLOCK HOMEBOY is authorized or endorsed by the Doyle Estate, when it is not.
The opposition goes from poetic to nasty towards the end. The Estate claims that Universal had full knowledge of the SHERLOCK HOLMES trademark at the time the application was filed and when it submitted a declaration claiming that there were no other similar marks in use, Universal knew the declaration was false. By submitting this declaration with false statements, the Estate claims that Universal committed fraud on the Trademark Office. How Moriarty-like of Universal.
Seems like the potential mark is just a parody but just because a mark is a parody does not justify it being registered as a trademark; parody is merely a defense to claims of infringement. Universal walked away from this registration before and it might do so again if they cannot resolve the dispute.

Disney to Duel with Band over &quot;Parrots of the Caribbean&quot; Trademark?

Star Trek Aims Phasers at Unauthorized Use of &quot;Live Long and Prosper&quot;

Tolkien Estate Thinks &quot;Bibo&quot; Dating Website is Not So Precious