Don’t get too excited muggles because it isn’t what you think it is. A movie studio caused a lot of excitement when it announced it’s new movie TROLL: The Rise of Harry Potter, Jr. but hopes were quickly dashed when it turns out the movie is not affiliated with the boy wizard, Harry Potter. But how can this movie use the HARRY POTTER trademark without permission?
Author J.K. Rowlings has said there would be no further adventures of Harry Potter but people have been skeptical. The prequelish movie trilogy, set in the same universe, Fantastic Beasts and Where to Find Them, is currently in pre-production and short stories from Rowling have popped up on her website every now and again. With this in mind, would we be surprised if a Harry Potter sequel eventually comes out, I don’t think so. 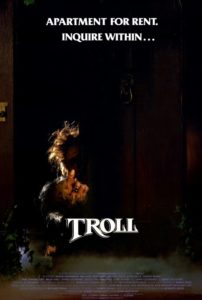 This week a film production company named SC Films International sent out a press release announcing that a new movie was going into production, TROLL: The Rise of Harry Potter, Jr. Many people assumed and still are assuming that this is a sequel to the J.K. Rowling’s books, but it is not. Instead, this new project is a sequel to the 1986 film Troll, released eleven years before the first Harry Potter book. Troll tells the story of the Potter family moving into a new apartment complex in San Francisco. While unpacking, their young daughter Wendy is attacked by a grotesque little creature, who had long ago been transformed from a powerful wizard into a troll. Using a magic crystal green ring, it captures Wendy and possesses her and hijinks ensue. Wendy’s dad is named Harry, Harry Potter, and her brother is Harry Potter, Jr. The original director and writer, John Carl Buechler, is heading back to this world in the form of a 3D animated feature sequel, *TROLL: The Rise of Harry Potter, Jr. *In a press release, the studio is quick to point out that the movie is not associated with the boy wizard but people are and will be confused otherwise.
Putting the HARRY POTTER trademark in the title of the movie is no mistake as it will draw interest in the a sequel to a 30 year old and not so popular movie but why is this company allowed to do so? The rule of thumb goes: the person to first exploit a trademark has rights to it. Here, Troll was first to use the name but the question is did it use the HARRY POTTER name as a trademark (a word used to identify the source of a product or service.) I can’t remember seeing many shirts or other merchandise bearing the HARRY POTTER mark from the 80’s. Also, for the last 30 years, the HARRY POTTER mark has not been used by the film company at all, so its a pretty solid argument to claim that the company abandoned the rights to the mark.
So while Troll was the first to use the name, I don’t think it was the first to utilize it as a trademark and if so, it may have abandoned those rights. I would expect J.K. Rowling to conjure up some opposition if the film does go forward and if they start releasing merchandise containing the HARRY POTTER mark or even if they try to register the trademark.