This is usually by favorite blog post of the year…but unfortunately work got in the way this year. So here is a blast from last year.
Happy holidays and an especially Happy Festivus to everyone. One time a year, we have a chance to stray from all the not-so-boring updates in the world of the law to completely rant on something holiday related. In past years, we have told you about why Scrooge got a bum rap in A Christmas Carol (found here) and counted down the naughtiest Santas of all time (found here).

This year, while watching some classic holiday specials, I found myself particularly disturbed by issues that I am sure most of us never think about when laying on the couch, devouring gingerbread cookies, slurping down hot chocolate and staring at the television. Here are some of the most disturbing things from your beloved holiday classics. 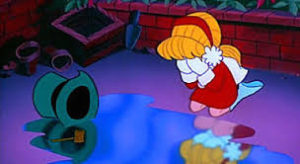 This is really the event that triggered this post for me. In Frosty the Snowman, So Karen is leading Frosty on a trip to the North Pole when the gang need a respite from the cold and head into a greenhouse full of holiday poinsettias. The greenhouse is warm but Frosty says if he loses a few pounds that wouldn’t be a bad thing. Professor Hinkle looks that door and when we come back to the scene, Karen is crying over a puddle of water that was once our beloved Frosty. So during that cutaway, Karen watched as Frosty screamed in terror, suffered unimaginable pain, and then died. Disturbing! I can’t even imagine how traumatizing that experience must have been but instead we never think about it because Santa brings Frosty back to life. Damage done to poor, Karen and off to the child psychiatrist for the rest of her adolescent years.

Buddy the Elf Has Diabetes 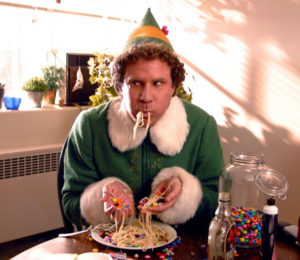 In Elf, according to Buddy, the four main food groups are candy, candy canes, candy corn and syrup. As part of his diet, Buddy puts maple syrup on everything and routinely downs gallons of soda. Since he is not an elf, but instead just an normal person, there is no way enduring such a sugar filled diet did not cause diabetes. Disturbing! Hopefully, Santa provides his employees with good health care.

The Citizens of the North Pole are all Bigots 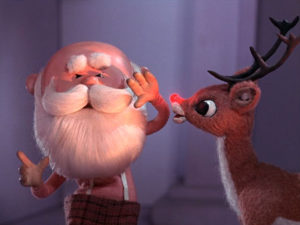 Rudolph the Red-Nosed Reindeer teaches us that the North Pole is not a very tolerant place. These hate mongers discriminate against the following: 1) people who do not want to conform (Herbie gets mocked for wanting to be a dentist); 2) people with different physical attributes (everyone, even Santa, hates Rudolph because his red glowing nose doesn’t look like everyone else’s; and 3) even toys that are slightly different get shunned to their private island of “misfits” (what’s wrong with an elephant with polka dots, kids would still love to play with him). Disturbing! You would think people of the North Pole would be a little more jolly and acceptable of alternative lifestyles but no, shortsightedness and hate speech are as common as snow in the North Pole.
**
Ralphie is a Future Mass Murderer** 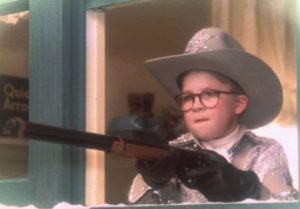 Ralphie from A Christmas Story is lauded with 24 hours of back to back viewing of the Christmas classic but he has an unhealthy infatuation with guns. All Ralphie ever does is talk about how he wants a gun and devises plans to guilt his parents into giving him one. So unhealthy is his infatuation that even during one of his daydreams Ralphie fantasizes about pulling out his rifle and shooting people as they try to enter his property. So a child dreams about killing people?? Disturbing! Ralphie’s future does not look bright. Perhaps he should have taken Santa’s advice and stuck with a football.

Kevin is the Victim of Child Abuse 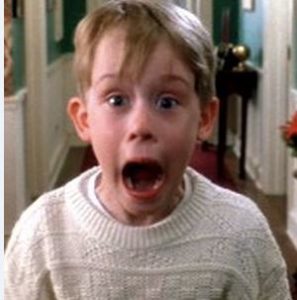 In Home Alone, Kevin finds himself abandoned by his parents during Christmas while his whole family head to France for a vacation. Make excuses about counting the numerous people in your house but you should be able to keep track of your children. This is nothing but pure neglect and child abuse. Disturbing! Social services really needed to step in to save poor Kevin but they didn’t and in the sequel he gets abandoned again in New York. Poor parenting, at its worst.

Hopefully, you can put these disturbing moments out of your mind while you watch these classics but I for one am scarred for life…kind of like Karen and Kevin. Happy holidays from Pirated Thoughts!!

Use of a Dead Celebrity's Likeness (Rogue One Spoilers)

Why You Need to Read Non-Compete Clauses in Employment Contracts

The Five Most Disturbing Things from Classic Holiday Specials