The “Burger of the Day” is the Trademark Pickle (comes with a pickle). Fox has been granted an extension of time to oppose the BOB’S BURGER EXPRESS trademark to cover a real life and not unauthorized “Bob’s Burgers” restaurants. 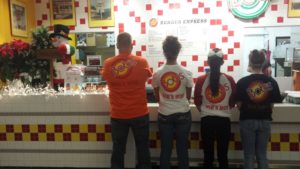 “Bob’s Burger Express” is a concession stand that appears at the Oregon State Fair but it also has fixed locations in Oregon as well. In the trademark registration filing, the company claims it has been using the BOB’S BURGER EXPRESS trademark in association with its restaurant services since October 2015. The chain, while it bears the name “Bob Burger,” does not appear to try to align itself with the television show. You can check out their very off center trademark sample images submitted in support of the application to the right.
If you haven’t seen Fox’s animated, Bob’s Burgers, stop reading this now and hit up the Netflix. No spoiler here but the premise of the cartoon is Bob Belcher and his family own, operate and live right above their restaurant aptly named “Bob’s Burgers”. The show has been airing since 2011 and is going into its seventh season this fall. Fox has filed and been granted an extension of time to oppose the mark.
In the trademark registration application, first use of the mark is claimed in 2015, well after the debut of the television series. Trademark rules give priority rights to those who use a mark first and not to registration. But, from the photos on the wall in this image, and more Google stalking, it appears that the usage of the word BOB in relation to the restaurant goes back further but they only claim first use of 2015. Why they didn’t claim use to the mark BOB with a use that trumps the television show, I have no clue.
Fox is left with several options at this point, they can oppose the mark, walk away or try to work out a coexistence agreement with the restaurant. Fox has until October to decide whether to oppose the mark or not. In the meantime, go catch up on some past seasons of the great show.