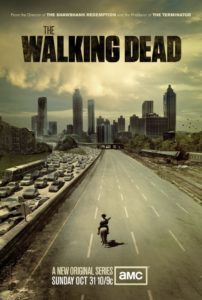 Frank Darabont, one of the developers of AMC’s hit, The Walking Dead, was unceremoniously fired from the show and was not too happy about it. In December 2013, Darabont rose from the dead and sued AMC claiming that the network is licensing the show at ridiculously low rates and cheating him out of money. Now, Darabont claims that after the lawsuit was filed, AMC has cut his profit share in retaliation and he wants more money.
Darabont, the director of many films including The Shawshank Redemption, is now best known for being a developer and original showrunner and then being fired from The Walking Dead. It was assumed that Darabont was fired due to a decreased budget and not getting along with executives at AMC; now Darabont is getting his revenge.
In a lawsuit filed in December 2013, Darabont, and his agents CAA, claim they have not received any profits from the show despite it being one of the most successful shows on television. Darabont alleges that AMC is involved in “self-dealing” whereby AMC licenses the show to AMC affiliates who broadcast the show at artificially low rates. Darabont claims that by setting an unrealistically low license fee for the series and employing questionable accounting practices he was deprived of millions of dollars in profit participation. To make this lawsuit even spicier, Darabont claims that he was fired from the show because AMC wanted to avoid its contractual obligation to pay him increased profits. Further, Darabont wants profits from the spin-off shows, The Talking Dead and Fear the Walking Dead.
Since December 2013, the parties have battled through discovery and yesterday, Darabont filed a request, on consent from AMC, to amend the complaint to add new allegations. Darabont claims that several months after he commenced his lawsuit, AMC improperly reduced Darabont’s sharing of the development profits from 10% to 7.5% and showrunner profits from 2.5% to 1.875%. Darabont also seeks showrunner profits for the second season of the show. These percentages may sound small but Darabont claims that each individual percentage point is likely to be worth millions of dollars.
Darabont has proven harder to put down than a hungry zombie. I would have assumed that this dispute would have settled early on but this looks like it will be an all out fight. The parties do not believe they will be ready for a trial until a year so this lawsuit will continue for a while.
*You can read more stories about The Walking Dead here. *

3D Print Your Own Spider-Man Mask But Get in Trouble?