Its a swing and a miss for an unauthorized Batman-themed softball team. The Trademark Office ruled that a New York area softball team cannot register the GOTHAM BATMEN logo or name mark because it is confusingly similar to DC Comic’s BATMAN trademarks. 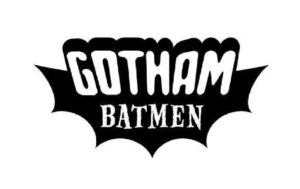 This trademark tussle has been going on for a while. Gotham City Networking, Inc. (“GCN”)  is what the name implies, a networking group for people who live in New York or Gotham. Back in 2009, in association with its softball team, the company filed two trademark registrations for the name and logo that can be seen to the right. Look and sound familiar? Of course it does but GCN kept fighting to register the trademark anyway.
Gotham City, is the home town of one, Bruce Wayne, and has been such since Batman was first introduced in 1939. DC Comics owns a plethora of BATMAN registrations and claims common law use of the GOTHAM trademark; DC Comics does own registrations for the terms GOTHAM GIRLS, GOTHAM CITY, GOTHAM CENTRAL and GOTHAM KNIGHTS. Further, DC Comics licensed television show Gotham features Commissioner Gordon and Bruce Wayne taking on a rogues gallery of younger villains. DC Comics use of the BATMAN and GOTHAM trademarks is quite famous.
The parties have been fighting over the registration since 2009 and had a ton of discovery, depositions, and attorneys’ fees, I’m sure. During discovery GCN’s President testified that  he has heard of Batman and the team was partially named as a reference to the character. And still the fight went up to the Trademark Trial and Appeal Board (“TTAB”).

The TTAB ruled that the BATMAN mark was famous and therefore entitled to a broad scope of protection. When examining GCN’s proposed marks the TTAB held that the terms BATMEN and GOTHAM and a batwing logo are sure to elicit a connection between the two marks especially because “Batmen” is just the plural version of “Batman”.  The TTAB also noted that the BATMAN mark has been licensed for a myriad of products including t-shirts, baseballs, bats and other sporting equipment, like batting gloves, and under these circumstances it makes confusion even more likely.
Therefore, the TTAB found that the word mark and logo are confusingly similar to DC Comic’s trademarks and denied the registration of the GOTHAM BATMEN trademark. If the team chooses to rename itself, please stay away from the Metropolis Supermen.

"The Killing Joke" Movie Can't Be Killed by Its Creator