Well folks, we knew this day was coming. The man, the myth, the Kung-Fu Panda legend, Jayme Gordon, has been found guilty of fraud. If you don’t recall, this is the man whose story was broke by the omnipresent Michael Lee about a year ago, and just updated two weeks ago, only to meet the grimmest of ends.

Again, just to reiterate, this is the guy who copied pictures from an old Disney coloring book and then claimed that his copies were the inspiration for the Kung-Fu Panda films. He filed a civil suit against Dreamworks and sought $12 million from them. The civil case was later dismissed after it was found that he copied the images from and old Disney coloring book. In other words, this guy was a real straight-shooter, totally not a con artist looking for a cash grab. Nah, not at all. 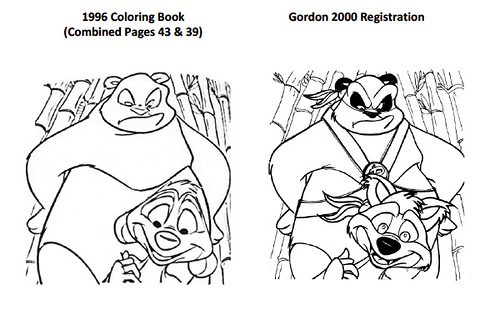 The recent developments here follow from Gordon’s criminal trial in the state of Massachusetts, you know, because you can’t do what he did, it’s illegal. At trial, this bamboo-for-brains defendant tried to assert that he didn’t copy from the Disney coloring books, rather that the coloring books copied from him. Wow, keep digging your own grave there, pal, great job. The jury came back with a guilty verdict as to Gordon’s charges for wire fraud and perjury. The wire fraud charges stem from emails sent by Gordon’s attorneys from his civil suit. The copyright attorneys from Gordon’s civil suit sent emails to Dreamworks demanding settlement, the jury found that Gordon would have known about the settlement demands and because the demands were made in an attempt to defraud Dreamworks, that Gordon had committed wire fraud. The perjury charges are pretty obvious. This guy pretty much hasn’t told the truth about anything related to this situation for well over a decade. He lied under oath about the coloring book scheme, and again when he said he hadn’t deleted anything from his computer when attorneys in the civil case requested they search the computer in discovery.
Gordon now awaits sentencing, which will likely bring with it heavy consequences. Judges hate stuff like this. It wastes several people’s time and resources, and the court is going to want to make an example out of Gordon. Gordon will have a decent amount of time to practice his coloring book copying, that is, if they allow coloring books in federal prison.