While Annie is common English name, it is also the name of one of the most precious, strongest mages in League of Legends’ line of original characters. Riot Games released information about Annie on February 21, 2009 alongside her stuffed bear, Tibbers, before the release of the game on October 27, 2009. For years, Annie was a poster-child of League of Legends and she continues to serve as the subject of much of the game’s official art.

In light of Annie’s spotlight in the League of Legends Origins video released earlier this year, it seems like Riot Games wants to keep Annie on the top of everyone’s mind. This explains why Riot Games filed a trademark application for the ANNIE mark on May 22, 2017, hoping that it could obtain the right to use the mark in a wide range of League of Legends merchandise including toys, clothing, stickers, various computer accessories, hats, and a slew of other odds and ends that could easily be attributed to marketing materials.

While gamers across the board are familiar with Annie, the USPTO is not so tuned in. The Office first denied Riot’s application to register the ANNIE mark on August 26, 2017 based on the argument that registration of the mark would cause likelihood of confusion in the marketplace. Specifically, the Office asserted that Riot’s ANNIE mark could easily be confused with one of the many other registered ANNIE marks, including Tribute Entertainment Company’s ANNIE mark, referring to the famous Little Orphan Annie; Annie’s Publishing’s ANNIE’S mark, utilized in print publications and crafts; TJK Footwear’s ANNIE mark, utilized in shoes; and several others.

Fortunately for Riot, the USPTO gave them the option of modifying the language of their application in order to overcome this barrier. As long as the types of goods were clarified in a specific way, Riot Games would be able to get their application through the USPTO’s Examining Attorney and forward to publication in the Official Gazette. Accordingly, Riot Games revived the application earlier this year and made the suggested changes.

While Riot’s ANNIE mark was published in the Official Gazette on May 15, 2018, this does not mean that Riot’s fight for the ANNIE mark was over. When a mark is published in the Official Gazette, any party who believes they would be damaged by the subsequent registration of the mark has 30 days to file an opposition (or a request for an extension of time therefor) with the Trademark Trial and Appeal Board. Upon publication of Riot’s ANNIE mark, Annie International Inc. did just that.

While it can sometimes be difficult to have faith in the attentiveness of the modern consumer when it comes to knowing the source of certain goods, I don’t think that confusion is a real issue here. Those who are seeking out products with their favorite League of Legends character on it are not likely to be confused as to whether Annie International’s hair wraps are along the same lines. Alternatively, those who are seeking out hair wraps, straighteners, and hair clips are probably not going to succumb to confusion between Riot’s ANNIE mark and Annie International’s ANNIE mark. 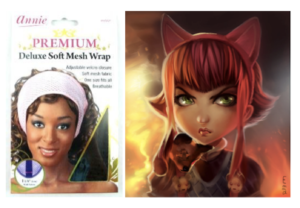 (Maybe the hair wrap could have cat ears?)

Alternatively, however, I also don’t think it would do any harm if Riot was to amend their application for the ANNIE mark to explicitly limit their use of it on headwear to be only in relation to the character, as this is likely to be their intent anyway in registering the mark in the first place. This seems like one of those cases that can be taken care of with a few administrative tweaks and an extra sentence in the application. It may seem like Annie Incorporated is being a pain, the business of marketing is all about doing the most you can to protect your brand.

Register Your Trademark Before Someone Else Does - Ask Markiplier