Want to have some butterbeer, head to Harry Potter World in Universal Studios; want some real beer, head to this bar in Toronto.
Recently, a new bar opened up in Toronto called “The Lockhart Bar” that has a subtle Harry Potter theme. The bar is named after Harry’s former Defense Against the Dark Arts professor, Gilderoy Lockhart. Lockhart appeared in the Harry Potter and the Chamber of Secrets book and was played by Kenneth Branagh in the movie. He is charming and popular but, spoilers for a very old book and movie, is a fraud who stole his stories of courage and amazement from other wizards and then erased their memories . The decor of the bar features some Harry Potter action figures among other trinkets. The bar’s “Potions & Elixirs” have names such as “Ludo’s Debt” (named after Ludo Bagman) and “The Shacklebolt” (named after Kingsley Shacklebolt) both Ministry of Magic officials. Some other drinks include the “Tinworth Iced Tea” (the location of the home of Bill Weasley and Fleur Delacour after their marriage) and the aptly named “Befuddlement Draft” which is a mixture of gin, vodka, peach schnapps, blue curacao, cherry brandy, triple sec, and ginger ale. In the books, “Bufuddlement Draught” is a type of potion which causes the drinker to become belligerent and reckless and I’m sure this crazy mixture of spirits will do the same thing. 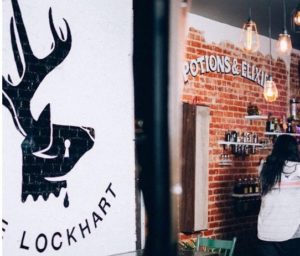 In the past, Warner Bros (the company behind the movies) has gone after some other locations that were Harry Potter-themed including a retail store designed to look like it was out of the books. You can read more about that here. The “Whimsic Alley” store was infringing both the Potter copyrights (by having a store that looked exactly like the stores in the movies) and trademarks (by using marks confusingly similar to the Potter marks). Photos of the bar can be seen on its website but The Lockhart Bar is not doing anything as egregious as the Whimsic Alley.
There are many difference between Whimisic Alley, that was sued, and the The Lockhart Bar. The bar is not selling Harry Potter merchandise and does not use any copyrights from the movie (other than the action figures). While the owners do not hide the relationship with the series of books and movies, they do not throw it in your face. The names of the drink might be more problematic but again the bar is using only parts of names from minor characters. The bar is trying to walk the line between Fair Use and infringement and doing a pretty good job.
A typical muggle could walk in the bar and have no clue that it is tied to the Harry Potter world, so The Lockhart Bar is subtle in its inspiration while avoiding too much infringement.