Another week, another HBO trademark battle with someone trying to register a mark containing GAME OF (INSERT ANY WORD HERE). Yesterday, HBO filed its opposition to the GAME OF DRONES trademark registered in connection with a proposed television show about drones and using drone footage. 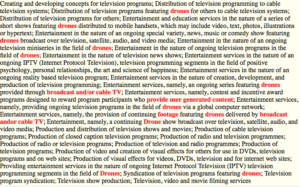 You can’t throw a ball into the air without hitting a drone or apparently a Game of Thrones related trademark. Kismet Media Group is a talent and brand management and content development company that filed to register the GAME OF DRONES trademark almost a year ago. This is an intent to use trademark registration so at the time of filing the mark wasn’t being used yet and still does not appear to be in use. GAME OF DRONES was filed with a very lengthy description that covers a television show about drones using drone footage….perhaps. You can try to make heads or tails out of this mumbo jumbo that can be seen on the right. Perhaps somebody was being paid by the word.
This mark may sound familiar because we wrote about it way back in good old 2015. Back then, HBO opposed a drone combat league’s attempt (and look who correctly predicted the outcome of that trademark dispute) to register the very same GAME OF DRONES mark. That fight didn’t end too favorably for the drone league as it walked away from the attempt to register the mark. Similar arguments are made in this opposition as HBO claims the marks are confusingly similar and people are bound to confuse GAME OF DRONES with GAME OF THRONES. The fact that the marks are so similar both is sight and sound is not helpful to GAME OF DRONES.
HBO’s trademark strategy is not bound to win over many fans as it has staked out a claim to anything GAME OF _____ related. These trademark battles have been occurring for a while and will continue into the future.  You can read about other HBO trademark wars such as GAME OF TROLLS, GAME OF STONERS, GAME OF MONARCHS and the list goes on. As long as HBO keeps making new seasons of the hit show, there are bound to be similar trademark fights in the future.

HBO Trying to Take Down &quot;Game of Drones&quot; TV Show