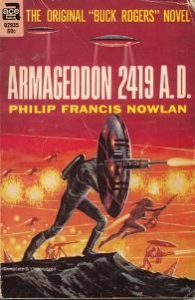 A judge refused to determine if the character “Buck Rogers” is in the public domain until the movie is made making the project a $100 million roll of the copyright infringement dice.

Forget the Final Four this is betting with incredible stakes. The tales of Buck Rogers first began way back in 1928 when his swashbuckling stories about space helped pave the way for the superheroes of the future. The character first appeared  in the book, Armageddon 2419 A.D. Born in 1898, Rogers is a veteran of World War I and by 1927 is working for the American Radioactive Gas Corporation investigating reports of unusual phenomena reported in abandoned coal mines  in Pennsylvania. There was a cave-in while he is in one of the mines and exposed to radioactive gas, Rogers falls into a state of suspended animation for almost 500 years. Rogers awakens in 2419 in a very different future and his adventures on Earth and into space begin.  The original book was written by Philip Francis Nowlan and the character became big when the John F. Dille Company, later known as the National Newspaper Syndicate, adapted the story into a comic strip. Since then, the character has been big on radio and even on television in the campy yet fun 1979 adaption that lasted two seasons.
Last year at San Diego Comic Con, Team Angry Filmworks, Inc., a movie production company behind such movies as Natural Born Killers, From Hell, The League of Extraordinary Gentlemen and The Transformers, announced its plan to adapt *Armageddon 2419 A.D. *into a feature length movie.  The Dille Family Trust, the company behind the comic strip that acquired rights to the book and character, sent a cease and desist letter to  Team Angry claiming that they needed permission or a license from Dille.

Team Angry got, well, angry, and filed a declaratory lawsuit asking for a judicial decree that *Armageddon 2419 A.D. *is in the public domain. Team Angry argues that the book fell into world-wide public domain in 2010; 70 years following the death of the book’s writer, Philip Nowlan. Seems like a darn good argument for Team Angry. Once a work has fallen into the public domain, anyone is free to exploit the plot and characters. The copyright may still exist for Dille’s comic strips but not the underlying source material.

But, this week, the judge dismissed the declaratory lawsuit claiming the matter is not yet ripe to disposition. The judge ruled that the lawsuit is premature and not yet an actual controversy because the film, at this point, is still only in development and lacked “significant, concrete steps” towards being produced and released the film. In other words, they have to be a lot further along in the process before the judge will entertain argument either way on whether the character is in the public domain.

So Team Angry is left with a gamble, do they make the movie and hope it is in the public domain but what happens if it is not. If it is not, they have wasted all the money to produce the movie and get sued for copyright infringement. Seems like there should be a better way to handle this but the judge was having no part of this dispute or not yet ripe dispute. This case teaches a lesson, make sure, without a doubt, if you are exploiting an old work that is absolutely is in the public domain.

Buck! Judge Refuses to Find Character is in Public Domain until Movie is Made