One Florida man thinks his 20 year-old idea is about to win him the lottery. Thomas S. Ross had an idea back in the 90’s that he thought would change the world: the “Electronic Reading Device” (ERD). From May to September in 1992, Ross drafted 3 schematics for the ERD, which included its rectangular shape with rounded corners, LCD back-lit screen, and cellular phone capability. Ross described his schematics as having “embodied a fusion of design and function in a way that never existed prior to 1992.” Take a look at one of Ross’ schematics below… it does look vaguely familiar. 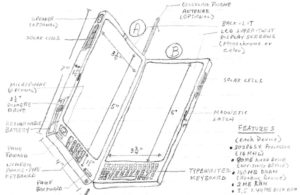 Claiming renditions of Apple products look similar to his design plans, Ross filed suit against Apple claiming that the iPod, iPhone and iPad all infringe upon his patented and copyright protected work. He has demanded a jury trial and feels confident that his case against Apple will be a slam-dunk, earning him over $10 billion in damages and a nice 1.5% royalty on all sales of the infringing Apple products.

We have a much lesser degree of confidence in Ross’ case. While he claims that his work was fully protected, USPTO records show a different story. In November 1992, Ross filed a utility patent to protect his invention and schematics, but in April 1995 the patent was declared abandoned because he failed to pay his application fees. Ross did file his schematics for copyright registration with the U.S. Copyright Office, but not until very recently in 2014. His delay and failure to pay his application fees could amount to the most expensive mistake he’s ever made.

This isn’t Apple’s first patent suit over their products either. Their patent battle with Burst ended with a $10 million settlement in Burst’s favor, so if Ross is going to get a payout, that’s the most likely route Apple will use. It’ll be an uphill battle for Ross against the tech titan who isn’t likely to cave to the man’s claims.

Moral of the story: keep your records up to date with the USPTO and pay the fees accordingly. You never know when $10 billion will come your way.

HBO Prepares to Light Up “GAME OF STONERS” Trademark