Tony Stark: “Jarvis, can you locate a trademark attorney.” Marvel has opposed Blackberry’s attempt to register a trademark for JARVIS in association with security software for cars claiming it is confusingly similar to Tony Stark’s Jarvis. 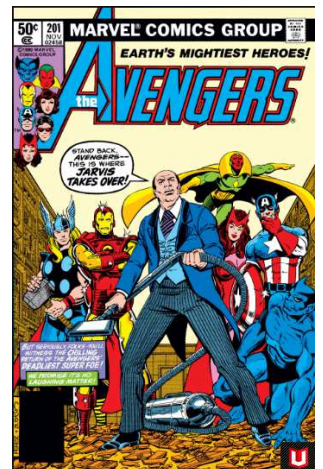 In November 1964, Marvel introduced the Edwin Jarvis character that was the personal assistant / butler / almost superhero in its comic books. In the 2008 Iron Man movie, we were introduced to Jarvis, the artificial intelligence system created by Tony Stark. We later learned through the missed television show, Agent Carter, that Jarvis was indeed the butler of a young Tony Stark and a sort of secret agent of his own. Marvel has included the character in games and even released merch bearing the JARVIS trademark.

Last year, Blackberry, remember them, the makers of the first big smart phone that kinda disappeared because people wanted to play more games than “Brick Breaker” on their commute, went in a different direction with their technology when they introduced Jarvis. Jarvis is a a cloud-based diagnostic system that scans the =software required for modern and autonomous cars. Jarvis scans automotive code in search of security vulnerabilities in the software.  In association with this new software, Blackberry filed a trademark registration application for JARVIS.

Marvel has opposed the issuance of the trademark claiming that people would be bound to confuse Marvel, techy JARVIS trademark with Blackberry’s techy trademark. I must admit that when I first hear the JARVIS mark I automatically associate it with Marvel but not sure the non-geeky public at large will. This trademark opposition has been a long time in the making and appears the parties were unable to reach a settlement. I anticipate that they will do so in the future. Jarvis, what is the probability that this matter settles. “98%, sir”