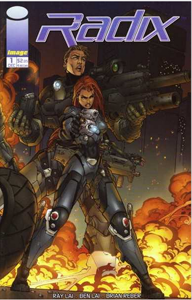 Iron Man was first introduced in his metal suit back in 1963 but that didn’t stop a comic book company from claiming that Marvel ripped off their body armor for the Iron Man suit that appears in the* Iron Man* movies. Part of the case was dismissed but Marvel still has to fight the claim that the Iron Man 3 poster is copyright infringement.

Horizon Comics Productions, Inc. is a Canadian company that owns rights to a series of comic books called Radix. In 2001, plaintiff published three volumes of the comic that feature heroic characters wearing highly detailed, futuristic and weaponized body armor. The creators of the comic, Ben and Ray Lai, after the Radix series, went to work for Marvel. Horizon Comics claims that “it was not until after the Lai brothers’ (grammatical mistake in original) submitted their work in Radix to Marvel that marvel began depicting Iron Man wearing the Suits”. Huh?? Horizon Comics claims that the Iron Man suits are substantially similar to theirs because they allow him to fly, shoot projectiles and perform superhuman feats. Horizon Comics completely ignores the fact that the suits have been doing this for decades, way before Radix was even created. The complaint, signed by two law firms in Boston, is filled with numerous mistakes as noted and an “Error! Reference source not found” message.

The idea of having a character wear an interactive body armor that fights crime is not protectable under copyright. Many other stories, including that character of A.T.O.M. now appearing on *Legends of Tomorrow, feature characters in a *a similar weaponized suit. What is protected is the overall look and details of the drawing and design that makes up the suit. In this case, armor featured in the Iron Man movies is not that dissimilar from earlier suits featured in the comics dating back to 1963. The upgrades and changes over time to the suits all appear to be derivative works of the original copyright. All the Iron Man suits are protected under copyright as well and predate the plaintiff’s comic.

Marvel made a motion to dismiss the copyright infringement case and it was a win/loss decision that came down from the judge. The judge agreed with Marvel and to the brilliant thoughts above that the idea of having a super hero fight in an armor suit is scènes à faire, common tropes from a genre that are almost obligatory of that genre and not afforded protection. Regarding the images above, the court wasn’t so quick to dismiss the case. The court concluded that there was sufficient evidence to support the claim that the Iron Man 3 poster was substantially similar to the Radix comic cover. Therefore, the case will proceed on Horizon’s claim of copyright infringement concerning the poster, only.

Graffiti Artists Heading to Trial Over Demolition of Buildings