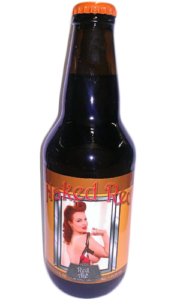 Naked Winery is headquartered east of Portland, Oregon and produces wines make from Oregon, Washington and California grown grapes. In an effort to win some of the ever growing wine market, Naked Winery has gone the scandalous route and branded its wines with some R-rated names including: “Missionary,” “Penetration,” “Tease,” “Shag,” “Climax” and “Dominatrix,” just to name a few. Naked Winery describes its approach as “an erotic, romantic, and sexually suggestive approach to the branding and marketing of wines.” This approach can also be seen in the company’s logos and labels. Naked Winery owns many registered trademarks for its names including seven trademarks that include the NAKED mark. Naked Winery has used the NAKED mark since 2005, way before the defendant’s line of beer came along.
Brew4You is a Pennsylvania based brewery that also uses erotic-themed names for its beers such as “Naked Red,” “Naked Blond,” “Naked Brunette,” and “Naked Pale”. The labels for the beer also feature some risque images as can be seen herein. In March 2013, Brew4You filed a trademark registration for the NAKED mark in a class that covers ale and beers. The bickering and fighting has been going on ever since finally leading up to this litigation.
On Monday, Naked Winery filed a lawsuit for trademark infringement claiming that Brew4You’s use of of the NAKED mark on beer is confusingly similar to Naked Winery’s NAKED marks. Naked Winery claims that confusion is likely since the marks are both used on alcoholic beverages that are erotically-themed, romantic and/or sexually suggestive. Essentially the argument is: if you see the NAKED mark on a bottle of beer, a drinker would be confused to believe that the mark and beer is associated with the Naked Winery when there is no relationship between the two.
Naked Winery immediately wants the Naked line of beers stripped from the marketplace (see what I did there) and seeks damages and attorneys’ fees. Since the parties have already been battling over the NAKED mark since 2013, it doesn’t seem like a quick settlement is likely.

Frankenstein Tattoo Leads to a Monster of a Copyright Dispute