If there is one thing that really gets under the skin of tattoo artists, it is the unauthorized use of their designs. The makers of the NBA 2K16 video game have been sued for copyright infringement for not having permission from the tattoo artists to reproduce LeBron Jame’s and Kobe Bryant’s tattoos. 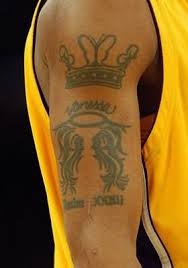 While you might have a tattoo for life, you do not necessarily own it. Copyright protection is given to a work when it is fixed in a medium. That medium can be paper, film, or even the human skin. The general rule is that the creator of the work is the owner of the copyright to it. Therefore, if your artist created the design and without an agreement in writing, they are the owner to the design of your tattoo.
Here, the plaintiff has obtained a license to enforce the copyright rights of several tattoo artists.  The tattoos in question are the following:
*LeBron James: child portrait on inner left forearm and three others
*Kobe Bryant: crown with butterflies on right bicep (seen to the right)
*Kenyon Martin: wizard of left shoulder
*DeAndre Jordan: script with a scroll on right shoulder
*Eric Bledsoe: basketball with stars and scripts
On September 29, 2015, 2K Games released its annual NBA basketball video game and within the first week it sold 4 million copies. The game features the likeness of NBA players including their tattoos. According to the Complaint, Take-Two (developer of the NBA 2K games) without a license, reproduced the copyrighted images of the players’ tattoos in its game. Despite being warned of the conduct, the company did so anyway. Yesterday, plaintiff sued the three companies behind the game for copyright infringement.

While we don’t know how the case will end, we do have a hint at how much money plaintiff wants to settle the action. In a curious decision, as an exhibit to the Complaint, plaintiff includes a document labeled “Confidential Settlement Communication.” Here, plaintiff cites a case where a tattoo artist was awarded $22,500 for the unauthorized use of his tattoo on UFC champion, Carlos Conduit, in the *UFC Undisputed* game. As a result, plaintiff demanded $819,500 plus a one time license fee of $1.1 million for the perpetual use of the these eight tattoos. These discussion happened in July, before the release of the game, but defendant went ahead and used the tattoos anyway without having an agreement in place. I’m sure these parties can reach a monetary settlement but it might hurt the defendants more than a needle.