If we have learned anything recently, it is how PG the Trademark Office likes to keep registrations but not for this brew. After an initial refusal, the TTAB has overruled a decision and will allow the registration of the NUT SACK DOUBLE BROWN ALE trademark for beer holding that the mark is not too vulgar. 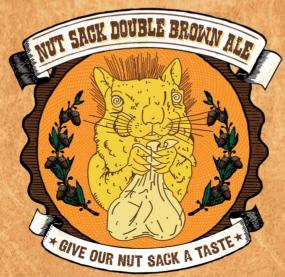 Section 2(a) of the Trademark Act permits the Trademark Office to refuse an application for a registration on the grounds that it “consists of or compromises immoral or scandalous matter.” The Trademark Office has held that a mark is scandalous by establishing that it is vulgar. Recently, the Trademark Office affirmed the denial of the F**K PROJECT (asterisks included) because it was too vulgar and initially did the same for this applicant. Engine 15 Brewing Company, a Florida based brewery, applied to register a trademark for its NUT SACK DOUBLE BROWN ALE in connection with the sale of beer. Of course, this just refers to a squirrel’s bag (or a sack) of nuts as clearly indicated by the beer’s label which can be seen to the right.
The Trademark Office initially invoked Section 2(a) and refused registration of the mark because the examiner found the term “nut sack” as offensive to a substantial composite of the general public because “the term ‘nut sack’ is a slang term used as a synonym for the scrotum.” (You cannot make this stuff up.) Engine 15 wasn’t happy with this result and appealed the decision to the Trademark Trial and Appeal Board.
The TTAB then went into a dissertation on the the dictionary and common definition of the term “nut sack” before deciding that some terms, such as “Nut Sack” as appearing within “Nut Sack Double Brown Ale” may seem somewhat taboo in polite company, but are not so shocking or offensive as to be found scandalous within the meaning of the statute. So “nut sack” is not as vulgar as “F**K”.  The TTAB said this conclusion is heightened in the context of the applicant’s chosen mark for beer, an adult beverage, the consumption of which is commonly associated with the relaxation of inhibitions. Well good to see that the TTAB relaxed its inhibitions on this one, reversed the decision and approve the mark for registration. All raise their “Nut Sack” and give a hearty cheers to the Trademark Office.

Frankenstein Tattoo Leads to a Monster of a Copyright Dispute