Well at least he didn’t blame the farm animals. After suffering a debilitating loss in a copyright infringement case, Robin Thicke now blames his divorce for his admitted “careless” testimony during the case. 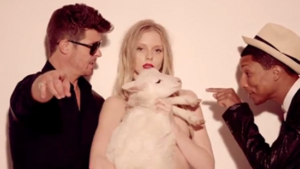 For a little background on the famous case, in August 2013, Robin Thicke, Pharrell Williams and T.I. preemptively sued the estate of Marvin Gaye and Gaye fired back with a lawsuit of its own over the song “Blurred Lines”. Specifically, the Gayes assert that “Blurred Lines” “sounds” and “feels” just like Marvin Gaye’s “Got to Give It Up”. However, plaintiffs deny copying those songs when creating their smash hit. During interviews Thicke claimed that in creating “Blurred Lines” they were inspired by the sound of a certain era and by Marvin Gaye. Robin Thicke at one point relied upon a unique defense to claims of copyright infringement over his mega-hit “Blurred Lines”: he was high on drugs and alcohol during the creative process.
During the case, Thicke claimed that he was “high on Vicodin and alcohol” while recording and promoting “Blurred Lines’” and accidentally exaggerated his creative role and Gaye’s influence on the process. Thicke claims that Pharrell Williams actually did most of the creative work on the song. Pharrell testified that the song merely invokes the “feel” on the 1970’s and he was actually inspired by working with Miley Cyrus (who wouldn’t be.)
This excuse didn’t go over too well with the jury who awarded $7.3 million for the infringement. Now, Thicke tells the New York Times that it was more than booze and drugs to blame, it was his divorce that lead to his over exaggeration of his role in the creative process. Thick claims “I didn’t give my all to the trial. It simply wasn’t as important to me as what was going on in my personal life. I was lost at the time. I had lost my way.” Thicke further claimed that he has taken a break from showbiz that started over a year ago…oops didn’t notice.
This realization wont help Thicke or his lawyers now as they continue to battle over the case. The jury’s decision is currently on appeal before the Ninth Circuit.

The Repeated Battles to Own &quot;The Walking Dead&quot; Trademark

“Blurred Lines” Song and Video about to Disappear?