With Star Wars Episode VII: The Force Awakens, Disney introduced everyone’s new favorite droid—BB-8. However, toy companies Sphero and Spin Master have spun themselves into a patent dispute over this loveable robot.
Technologically speaking, what makes BB-8 unique is it its ability to independently roll its spherical body in any direction while its domed head remains upright as the body spins beneath it. Magnets keep BB-8’s head attached to its body, but also repel just enough to prevent direct contact between the head and body and allow for smooth movement. BB-8’s head appears to float over its body as it moves.

Sphero had been developing user-controlled, self-propelled robotic spheres since 2011—perfect for a BB-8 toy. After meeting with Lucasfilm, Sphero developed and patented, U.S. Patent No. 9,211,920, a new “tilt” feature for its BB-8 robot to capture the movement and personality of the on-screen BB-8; the toy BB-8 head would charismatically tilt when the sphere accelerated and decelerated. Sphero’s 4-inch tall BB-8 toy was released on September 4th, 2015, and currently retails at $129.99. (This blog’s Jedi Master is the fine owner of one that sits on his nightstand.)

Beginning in February, 2016, Spin Master introduced and demonstrated a much larger, 16-inch BB-8 robot at various toy fairs. Sphero has now brought suit for patent infringement. First, generally, for a wirelessly controlled spherical, rolling system with a magnetically managed head, and second, specifically for the “tilt” mechanism. Spin Master’s BB-8 is set to be released as early as September of this year and will retail for about $180.

Generally, patents protect novel mechanical inventions, like Sphero’s BB-8 “tilt” mechanism. It is infringement to make, use, or sell any patented invention. Infringement can be established even if the product hasn’t hit the market yet. Do or do not, there is no try when it comes to patent infringement. 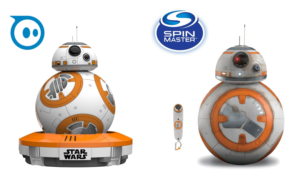 Interestingly, Disney seems to hold a patent for a magnetic spherical balancing robot that predates Sphero—and even predates Disney’s acquisition of the Star Wars franchise. Disney’s patent, U.S. Patent No. 8269447, was filed in 2010 and presents inventions suspiciously similar to BB-8. If Sphero’s invention wasn’t novel, or new, it’s patent can be challenged.

Even if the general system wasn’t novel, Sphero’s “tilt” mechanism might be. While it is unclear what exact internal mechanisms the Spin Master BB-8 uses (Spin Master has declined to reveal the inner workings of its BB-8), Spin Master be infringing if its BB-8 is uses Sphero’s patented technology. For now, the courts may be their only hope.