Insurance companies aren’t known for their sense of humor especially when you (sea)monkey around with their trademark. State Farm Insurance is up in smoke over a new proposed trademark featuring a play on their logo claiming “like a good neighbor pot farmer’s share!” 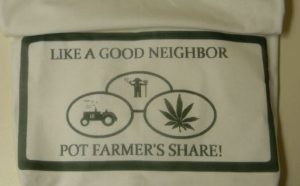 There are a lot of pot trademark disputes in the news and here is another one. On October 31, 2014, a company called Seamonkeytees, LLC (wonder if they have permission to use the SEA MONKEY trademark in their name there) filed a trademark registration for the logo that can be seen to the right. Not sure why there is an apostrophe after “farmer” instead of it just being plural but we will stop playing grammar police. The registration, which is a play off of State Farm’s trademarks, covers goods described as t-shirts, hats and sweatshirts. The registration is an intent to use mark but from the look of the picture it is now being used. The picture came from the Pinterest account of Matthew Henderson, who according to a LinkedIn profile, is the owner of Monkeytees. Henderson also posts another photo of a “hilarious” “Flappy Birds” parody called “Flappy Turds” featuring flying toilets. You can see all of these images here.
State Farm apparently isn’t laughing over this attempt at parody. Since 1971, State Farm Insurance has used the LIKE A GOOD NEIGHBOR, STATE FARM IS THERE (must be sung) trademark and its three ovals logo dates back all the way to 1953. The aforementioned two logos are registered trademarks as well. State Farm argues that the applicant seeks to trade off of the goodwill and recognition associated with State Farm’s trademarks. State Farm further argues that there is a high likelihood of confusion between the Seamonkeytees’ mark and State Farm’s. State Farm claims the mark is “immoral or scandalous” because it “excites reprobation, calls out condemnation, shocks the sense of decency or propriety”. So tell us how you really feel about the propose trademark, State Farm.
Of course, like Seamonkeytees’ other shirt, this is a parody of State Farm’s trademarks. However, a recent TTAB decision held that while parody may be a defense to claims of trademark infringement it does not justify the registration of a confusingly similar mark. This recent decision rejected a proposed registration for the mark THE HOUSE THAT JUICE BUILT even though it was a parody of the New York Yankees’ mark. You can read about that case here. With the precedent set by this decision, it seems Seamonkeytees may be out of luck in trying to register this mark. Seamonkeytees can fight to have the mark registered or head back to the farm, relax and try again with another trademark.