I guess this article can just add to the lawyers are sharks jokes…which are usually about right. A wildlife photographer has sued the movie studios behind Steve Jobs for copyright infringement over the use of a photograph of a shark which the photographer claims was used without permission. The bloodbath didn’t stop there as the ferocious litigant also sued several theater chains that were merely showing the movie. 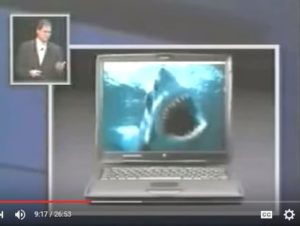 Carl Roessler turned his hobby and passion of scuba diving into his career. In 1972, Roessler began taking underwater photographs and became renown for some amazing photos of undersea life. In February 1994, Roessler took a photo of a young, hungry male Great White shark, approximately 14 feet long, of the coasts of Australia. The image, which can be seen in Google image searches, became known as the “Maddened Attack”.
In 1998, Apple licensed the image for use during a presentation by Steve Jobs introducing Apple’s PowerBook G3 laptop computer to demonstrate Apple’s aggressiveness in competing with Windows and Intel computers. Jobs stated about the new PowerBook that “it eat’s Pentium Notebooks for lunch” when the image appears behind him. Not the best quality image from the presentation can be seen to the right. While the image was licensed for Apple’s presentation, it was not licensed for the movie, Steve Jobs.
In the recently released film, the image appears when Steve Jobs is preparing for his presentation and Jobs reviews 39 images of sharks before he finds the right one. This scene never occurred in real life and screen writer Alan Sorkin apparently got the idea when Jobs tasked an employee to find the perfect picture of a birthday cake to use during another presentation. The image also appears in the background of other scenes.
Roessler describe the image as “central to the movie” and claims he never gave permission for the image to be reproduced, distributed or published. Roessler sued for copyright infringement against the movie’s production companies which include Universal Pictures and Legendary Pictures. In a bold move, Roessler also sued movie chains AMC, Regal and Cinemark for merely showing the movie that contains copyright infringement. This seems like a shark-like move and probably will make settlement a lot harder. Rossler seeks a preliminary injunction banning the further distribution of the movie containing the alleged infringement, his damages and costs. The movies studios should have cleared the image for rights and may believe that they are protected under the doctrine of Fair Use. Also, it would be hard to gauge damages caused by the appearance of the shark image in the background of the movie. We will see if this will be a battle to the death of if defendants will cut bait and look to settle quickly.