It’s game on! The NBA’s Seattle SuperSonics are opposing the trademark registration for SEATTLE SUPERCHRONICS filed by a Seattle marijuana cafe. 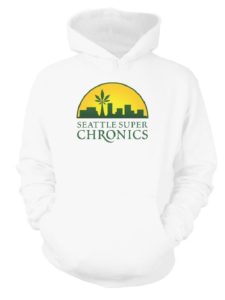 Flashback to 1967, when Seattle’s first major league sports franchise was born. The team was named the SuperSonics after Boeing’s recently awarded contract for a new plane, which was later canceled. The team is commonly referred to as the Sonics but have been using the trademark ever since.
Flashback to 2008, when a Washington native, in order to ease the pain of a friend who was suffering from Multiple Sclerosis, began growing marijuana to make sure his friend had a steady supply of joints. The company has big plans for expansion including opening the Seattle SuperChronic Café and Cannabis Lounge and building the World’s 1st Commercial Joint Rolling Machine. In order to fund these plans, the company takes donations and sells t-shirts and sweatshirts. In association with the clothes, the company filed to register the trademark that can be seen on the shirt herein.
Last week, The Professional Basketball Club, LLC (the cool sounding proper business name of the Supersonics) formally opposed the registration of the trademark. The Sonics argue that the marks are confusingly similar and are used in the same class of goods (clothing). The Sonics argue that the marks are so similar in sound, sight, meaning and commercial impression that it is likely to cause confusion to make people believe that the SUPERCHRONICS mark and merchandise bearing its mark are endorsed by of affiliated with the Sonics.
From looking at the trademarks below, it is not hard to see why the Sonics think they are confusingly similar. When taken from afar, many people would mistake the Chronics’ logo for the Sonics’ logo. While this may be Fair Use or a parody of the Sonics’ mark, parody does not justify the registration of a mark. Parody is merely a defense to claims of infringement which may also come in the form of a lawsuit if the Seattle SuperChronics keep using the name. Maybe time to mellow out and come up with a new business name or the trademark infringement problems are just going to go into overtime.

Honey Badger Mauls Bed Bath &amp; Beyond with a Lawsuit over Unauthorized Merchandise

&quot;F**K&quot; is Too Scandalous for the Trademark Office