It’s the most wonderful time of the year and time once again to stray from the exciting world of the law to something a little more fun. Last year, I wrote about the many ways that Ebenezer Scrooge got a bad rap, you can read about that here, turns out the grumpy Christmas hater was not such a bad guy after all. We all love Santa but this year I wanted to take a look at some really bad, no good, top of the naughty-list Santas.
Gimbel’s Santa Claus (Elf) So Buddy the Elf finally makes his way through the seven levels of the Candy Cane forest, past the sea of swirly, twirly gumdrops, walked through the Lincoln Tunnel and wound up working at Gimbel’s department store. Buddy expects to meet the real Santa but instead winds up fighting with an imitator (comedian Artie Lange famous from MadTV and The Howard Stern Show). As Buddy describes this faux Santa, he smells like beef and cheese and the two duke it out. Clearly a bad Santa…and a smelly one two.

**Santa Claus (Rudolph the Red-Nosed Reindeer) **Ok, hear me out on this one. First off, the guy is way too skinny and complains when he has to eat. Santa likes cookies, get used to it. Second, he calls his wife “momma”, which is just plain creepy. Third, he clearly is a fair-weather friend because he doesn’t like reindeer with glowing noses but as soon as he needs something from Rudolph it’s all like “oh hey buddy, we missed you, now help me”. Not a good Santa in my book, case closed. 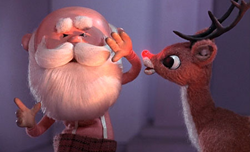 **Criminally Insane Santa Claus (Tales from the Crypt) **Here we actually get two Santas for the price of one. The short story of about a homicidal Santa Claus made its way onto film in two different Tales from the Crypt, a movie from 1972 featuring Joan Collins and the television show featuring the lovable Benny from *L.A. Law. *In both versions, a woman kills off her husband on Christmas Eve while their daughter sleeps upstairs. However, the child soon awakens and lets a deranged escaped mental patient Santa Claus into the house that quickly does away with the murderous mother…pure irony there. You do not want these guys coming down your chimney. 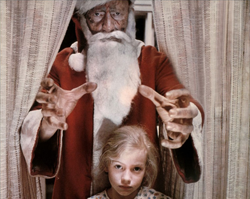 **Santa Claus (A Christmas Story) **All Ralphie wanted for Christmas was the official Red Rider BB Gun, a great gift for all children. When Raphie struck out with his parents, the future NRA member turned to Santa Claus. All Santa gave him was a kick in the face and told him he would shoot his eye out. Fudge!

**Robot Santa Claus (Futurama) **In the future of Futurama, a robot company built a robotic Santa Claus that was intended to be able to determine whether people were naughty or nice and deliver presents but a programming error resulted in standards so high that he pronounced everyone naughty and proceeded to spend Xmas traveling around the world dishing out destruction and mayhem. Voiced by John Goodman, Robot Santa leaves gingerbread massacres across the world as he tries to destroy the whole population. Lock your doors this Xmas. 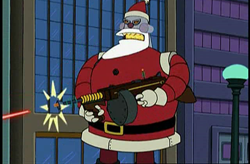 **Drunk Santa Claus(es) (Santa Con) **To any of those people out there who once a year treat Christmas as St. Patrick’s Day, for shame on you. The only thing Santa likes chilled is his milk and he only eats his cookies and never tosses them! 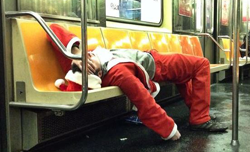 Anyway, Pirated Thoughts wishes you the best this holiday season and a happy 2015! And a Happy Festivus to all!!

The Top Five Most Pirated Television Shows of 2014