You may recall when Disney and Lucasfilm took legal action against Ren Ventures Limited and Sabacc Creative Industries in 2017 with the argument that it had superior rights to the use of the SABACC mark. While it appears from the court docket that things were looking in the direction of settlement, Ren Ventures Limited and Sabacc Creative decided to fight back by filing a countersuit earlier this week.

In addition to Disney and Lucasfilm, both of which were both parties to the original 2017 case, several new defendants have been added to the docket. The new parties to the case include Denny’s Inc, the 24/7 diner; EP & Co., an advertising agency based out of South Carolina; and Collider, an art and film studio that appears to be based out of New York.
Apparently, Disney and Lucasfilm has paired up with Denny’s to promote Solo: A Star Wars Storywith a Solothemed menu and a commercial titled “Hand of Sabacc,” which debuted in early-April and was created by EP & Co. alongside a partnership with Collider.

The complaint was filed on April 23, 2018 and illustrates in detail how Ren Ventures and Sabacc Creative came to register and license the SABACC mark in 2016 for their playing-card video game. The complaint explains that the word “sabacc” refers to a mix of the playing-card games Poker and Blackjack, making it a suitable name for the fast-paced video game that echoes the very same idea.

As Michael Lee noted in the post he made on this dispute in 2017, it is very likely (and is definitely becoming even more apparent) that *Solo: A Star Wars Movie *will prominently feature the Star Warsuniverse’s version of the card game sabacc in telling the story of how Han Solo won the Millennium Falcon. The complaint even mentions that Donald Glover (who will be playing Lando Calrissian) mentioned the game of sabacc in promoting Solo, confirming that a variation of the game would appear in the film and stating that, *“*Yeah, we are playing a game of sabacc. A lot of it, you know?” The promotional materials for Soloalso includes a still of Lando playing the game. 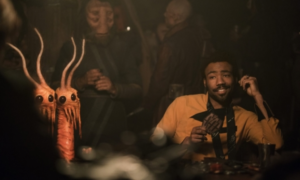 Specifically, Ren Venture and Sabacc Creative allege several counts of Federal trademark infringement as well as unfair competition in violation of California law. The essence of Ren Venture and Sabacc Creative’s argument is that it never gave Disney, Lucasfilm, or any of the above-mentioned parties the right to use the SABACC mark in the promotion or creation of Solo. They allege that the valid registration of the SABACC mark alongside the mark’s distinctiveness in the video game marketplace gives them the right to determine whether Disney and Lucasfilm can use it at all– regardless of the fact that the game of sabacc was first mentioned in the original screenplay for *Star Wars: Episode V *in 1980 and a trilogy of *Star Wars *novels published 1983.
We don’t know what happened in the settlement negotiations that caused Sabacc Creative and Ren Venture to take such a dramatic step. Regardless, I’m still not convinced that filing a countersuit against multi-media giants like Disney and Lucasfilm is the smartest economic move.

First of all, I’m sure it will be hard for the court to ignore that the Star Warsuniverse is a massive franchise and the game of sabacc is synonymous with the Star Warsfiction. Additionally, I think it would be difficult for Ren Venture and Sabacc Creative to argue against the fact that at least someof the success of their “Sabacc” game came from consumers looking to play the *Star Wars *universe version of sabacc- especially with talk of Solo: A Star Wars Storyhappening over the last couple years.

It will be interesting to see what this countersuit leads to and how Disney and Lucasfilm react alongside the new parties, but I have no doubt that their legal teams are going to have a busy year.